The splendor and natural productivity of California’s coastal ocean waters is well known to locals and visitors alike. One of the more prominent features along the southern Sonoma County coastline is Bodega Head, a rugged headland located about 40 miles northwest of San Francisco. The majestic beauty of Bodega Head is unparalleled, and can be explored on land by visiting Sonoma Coast State Park. On the lee side of the headland lies Bodega Harbor, with shallow, sandy Bodega Bay stretching southward to where it meets Tomales Bay in Marin County.

Expansive Rocky Reef
Offshore of Bodega Head lies one of the most expansive rocky reefs in northern California. The reef encompasses an area of about 10 square miles and extends to a depth of 260 feet. The large extent and depth range of this reef creates important habitats for a wide range of species, and is a key feature of two marine protected areas (MPAs) – the Bodega Head State Marine Reserve (SMR) and Bodega Head State Marine Conservation Area (SMCA). Together, these MPAs protect approximately three quarters of this expansive reef, and function in concert with the other MPAs throughout California to protect the area’s ecosystem, rather than single species.

Another unique aspect of the Bodega Head MPAs is their proximity to a world renowned academic institution – the University of California, Davis Bodega Marine Laboratory.

Scientific Research and Monitoring
Research and monitoring are critical components of the California Department of Fish and Wildlife’s (CDFW’s) MPA Monitoring Program. Rooted in building partnerships that leverage existing capacity, the MPA Monitoring Program is designed to further our understanding of how ecosystems respond to protections. For example, to monitor intertidal rocky reef habitat within Bodega Head SMR, the Multi-Agency Rocky Intertidal Network has conducted annual long-term monitoring surveys and periodic biodiversity surveys since 2001. To monitor offshore rocky reef habitat within Bodega Head SMR at depths of 30 to 160 feet, the California Collaborative Fisheries Research Program has conducted two years of hook-and-line, and catch-and-release surveys (2017-2018). Although scuba diving surveys are regularly conducted by the Partnership for Interdisciplinary Studies of Coastal Oceans and Reef Check California in other parts of the state, the Bodega Bay MPAs are not surveyed by divers due to frequent sightings of white sharks.

Lingcod observed during a ROV survey in the Bodega Head MPAs. CDFW/MARE photo 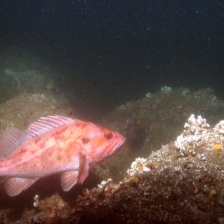 To dive a little deeper (pun intended!) without the risk of being bitten by a shark, remotely operated vehicle (ROV) surveys were conducted in depths of 40 to 260 feet in the MPAs and at nearby reference sites (outside of MPAs) during 2010, 2011 and 2015 by CDFW and Marine Applied Research and Exploration. ROV surveys revealed a diverse array of fish and invertebrate species in the deeper parts of the reef. Common fish seen during the ROV surveys included a variety of rockfishes, Lingcod (Ophiodon elongatus), and Kelp Greenling (Hexagrammos decagrammus). Common invertebrates included sea cucumbers and anemones, such as the giant red sea cucumber (Parastichopus californicus) and the white-plumed anemone (Metridium farcimen). Other common invertebrates included bryozoans and sea stars.

Research suggests that the reef could support a high number of certain fish species due to its expansive area. As part of a collaboration between CDFW and UC Davis, postdoctoral researcher Dr. Nicholas Perkins analyzed ROV survey data to model the abundance of fish across this area. Dr. Perkins’ research revealed the importance of the reef as habitat for Brown Rockfish (Sebastes auriculatus) in particular. In fact, according to Perkins, “ROV survey data from this area showed the highest densities of Brown Rockfish across all ROV surveys conducted statewide.” Further research by Dr. Perkins and others is ongoing to ensure that future monitoring can detect trends in species such as Brown Rockfish over time.

Building upon long-term datasets that cover a large geographic area provides a wealth of information about California’s marine resources and our MPAs. To learn more about long-term MPA monitoring efforts in California, dive into CDFW and the Ocean Protection Council’s MPA Monitoring Action Plan.

It’s All About the Network
The Bodega Head SMR and SMCA were established in 2010 as part of California’s MPA Network, which collectively aims to enhance marine resources for various purposes such as protecting natural diversity, habitats, and abundance of marine life, and improving recreational, educational, and study opportunities in areas subject to minimal human disturbance. California’s MPA Network is managed collaboratively as a statewide network through the MPA Management Program, which includes four focal areas: outreach and education, enforcement and compliance, research and monitoring, and policy and permitting.