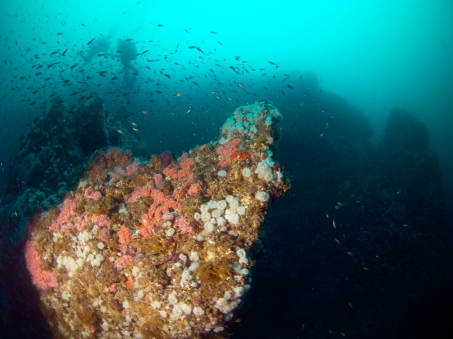 Young rockfish over a reef covered with anemones, divers in the background. photo © Roger Carlson 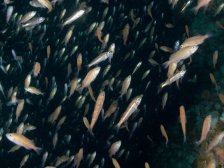 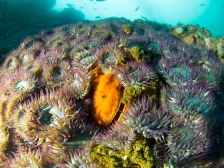 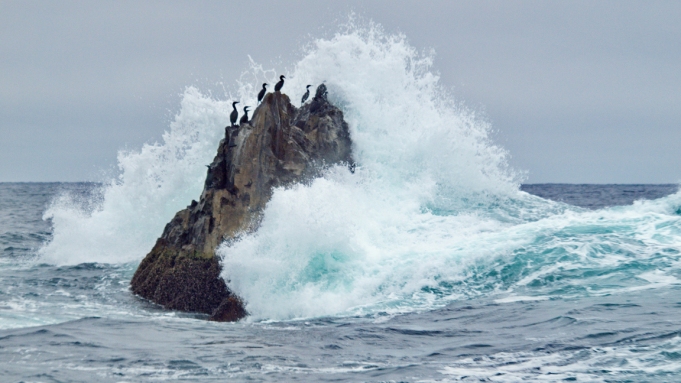 Begg Rock, a small pinnacle jutting up around 15 feet from the ocean’s surface, may not look like much to the passing eye, but below the surface its marine life is abundant. Located about eight miles northwest of San Nicolas Island and nearly 60 miles from the Southern California mainland, it is by definition “remote.” After a six- to eight-hour boat ride to reach this isolated location, divers lucky enough to visit are immersed in a world like no other. Every inch of available reef is used by some form of underwater life, whether massive scallops, schools of fish, or colorful anemones. The area is a true example of exceptional biodiversity, but more than 70 years ago Begg Rock had a much different reputation.

“Steer clear of Begg Rock!” was the more common thought during the 1940s and ‘50s, when this remote pinnacle was used for target practice by the U.S. Navy. Missiles would speed towards Begg Rock, fired from the Naval Air Missile Test Center at Point Mugu. Ships and boats were warned of any missile firings in advance so they could avoid the area and the impending impact – no one would want to be in the area when a “bird” struck.

Notably, in March 1950 the submarine Cusk launched a Loon guided missile from its position near the Naval Air Missile Test Center. At the midway point of the Loon’s 50-mile flight, the Cusk surrendered control of the missile to the guidance station on San Nicolas Island, which then guided the missile towards Begg Rock, its target. Splashing down within 360 yards of the target site, this marked the first successful guided missile transfer operation.

Although nearby San Nicolas Island still has ongoing military activity and is used for weapons testing and training, it has been decades since the last missile hit the Begg Rock area. The remote location now offers more protections than missile targets. The waters near Begg Rock and neighboring San Nicolas Island were established as an Area of Special Biological Significance by the California State Waterboards in 1974 based on their relatively pristine water quality. Most recently in 2012, Begg Rock State Marine Reserve (SMR) was established by the California Fish and Game Commission to encompass almost 38 square miles of marine habitat, and became one of California’s 124 marine protected areas (MPAs). 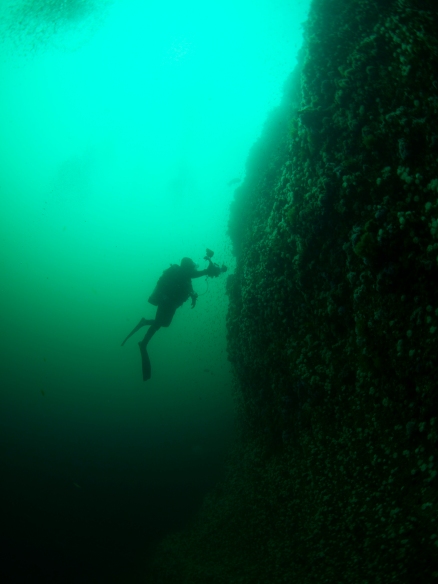 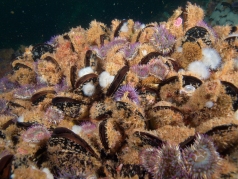 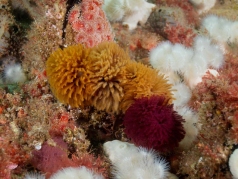 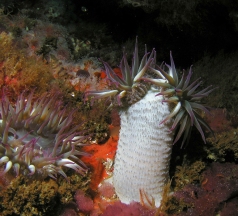 Nowadays, Begg Rock is not actively avoided as it once was, but it is still difficult to experience first-hand. As an open ocean pinnacle, Begg Rock (as well as any boat or diver trying to get there) is at the mercy of the wind, waves, and swell. Its remote location usually requires divers to visit via a multi-day, live-aboard dive vessel. By the time a vessel arrives, the ocean conditions around Begg Rock may be deemed too dangerous to dive and the vessel will go elsewhere, leading divers to joke that they have been to Begg Rock many times but have never seen it underwater.

“It is special to wake up and find the boat at anchor with no islands in sight,” said avid diver Roger Carlson. “It can be hard to see Begg Rock at high tide, and it is easier to tell where you are by the smiles on the divers around you.” So, when weather conditions permit, and an anchor is dropped, divers know they are in for a treat.

There is often significant upwelling at Begg Rock, which is a process that brings nutrients up from the deep ocean. While this upwelling is great for microscopic algae (phytoplankton) which bloom in the nutrient-rich water and cause the surface waters around Begg Rock to turn green at times, the water at depth is often remarkably clear. According to Carlson, “diving among the pinnacles and canyons in clear water is like flying over the Alps.” 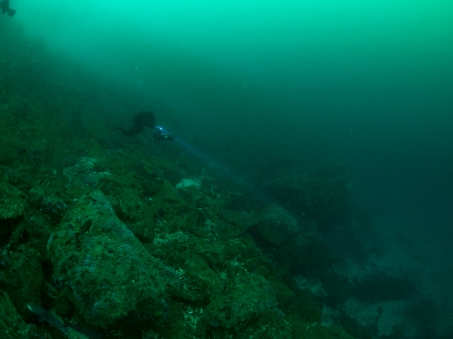 Diver points a light into the depths at Begg Rock. photo © Roger Carlson 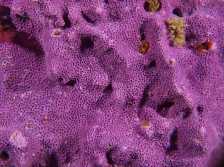 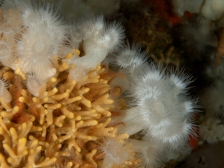 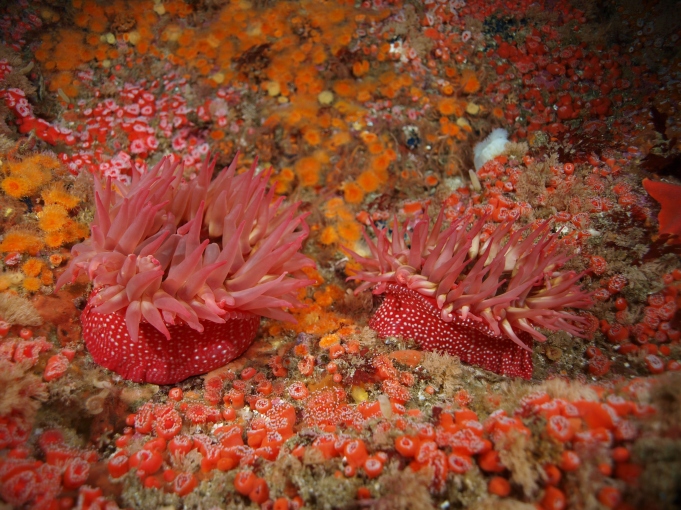 The steep pinnacle walls, which plunge to depths of more than 300 feet, are covered with filter-feeders: animals that filter the water for their meal. The cold, nutrient-rich water that constantly swirls around Begg Rock is like an all-you-can-eat buffet for these animals. Anemones, barnacles, and scallops grow to amazing sizes thanks to the abundant food supply that circulates around them. Other invertebrates like keyhole limpets, sea stars, and nudibranchs maneuver slowly along the reef in search of meals of their own. Divers who enjoy underwater photography will have a field day taking their time to capture the diverse life inhabiting this colorful reef.

Those who take a moment to look up from the reef will be treated to sights of more marine life. Multiple species of rockfish may be spotted moving in schools amongst the pinnacle’s formations.  The exposure to the open ocean could also invite fish like Mola mola or larger mammals like common dolphins and sea lions. Looking back down on the reef, beautifully colorful but camouflaged fish like cabezon are popular subjects for visiting divers practicing underwater photography. 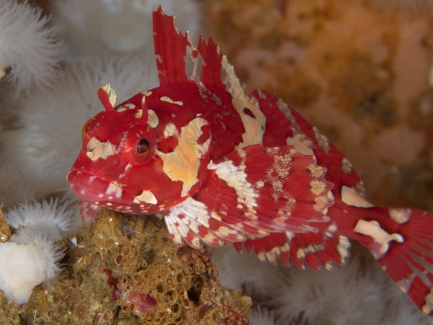 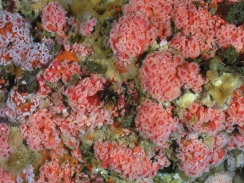 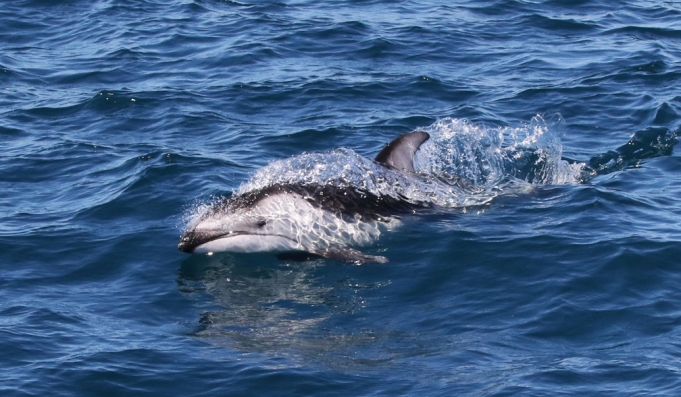 Begg Rock is not terribly large above the ocean’s surface. It doesn’t support nesting seabirds or provide a place for marine mammals to haul out and rest, so there’s not much in the way of  wildlife viewing for people who don’t scuba dive, and the area does not allow for any type of take (including fishing or collecting). Given this, the average person might not list Begg Rock as one of their must-visit California MPAs. But for certified advanced divers, Begg Rock SMR could easily rate as a top-10, must-visit site. Once below the surface, the incredible abundance of marine life gives no hint of the area’s destructive past.

While divers may be tempted to take more than photos given the flourishing marine life, no marine resource (living or non-living) may be taken since this location is within a state marine reserve. So, if you are ever lucky enough to visit Begg Rock SMR, make sure you take nothing but pictures, leave nothing but bubbles, and enjoy your experience at this once-in-a-lifetime dive location.

Begg Rock State Marine Reserve is one of the 124 MPAs in California’s statewide MPA Network. Please visit CDFW’s MPA website for more information, and sign up to receive updates about the MPA Management Program.