Winding along Highway 1 north of Fort Bragg takes you through coastal plains, patches of forest, and hidden dunes, with a glimpse of the ocean from time to time. As you approach the bridge that crosses Ten Mile River, the scenery suddenly opens up to a panoramic view of ocean and estuary in an area known simply as Ten Mile.

Located side-by-side in ocean waters, Ten Mile Beach SMCA and Ten Mile SMR share a boundary that runs due west from the shore near the mouth of Ten Mile River. While these MPAs are adjacent to one another, they encompass very different, but interacting, habitats and ecosystems.

A Study in Contrast
The coastline that borders these two MPAs is a study in contrast. Wind-swept bluffs plunge as much as 50 feet down to the rocks at Ten Mile SMR, and numerous offshore pinnacles, haystacks, and arches pierce the water’s surface. Small pocket coves of sand and gravel provide a respite from the rocky shore. There are short stretches of sandy beach towards the southern boundary of Ten Mile SMR, though these beaches are still punctuated with many rocks.

Extensive areas of flat rocky reef lie at the base of the bluffs along much of the coast of Ten Mile SMR. These reefs, the remains of a submerged, ancient marine terrace, are subject to the constant crash and wash of waves. Seals and sea lions haul out on this terrace and other low rocks nearby to sun themselves and rest between feeding forays for abundant fish and crustaceans. 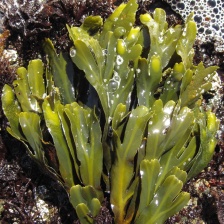 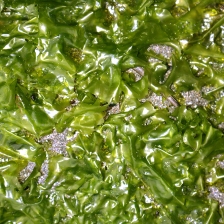 Because of the abundance of food and suitable habitat, Ten Mile SMR is an excellent place to look for seabirds. Some species, like black oystercatchers, pick prey items from the intertidal area, while other species, like cormorants and pelicans, plunge into the water to grab fish and crustaceans. Many of the offshore rocks host breeding colonies of seabirds, including black oystercatcher, pigeon guillemot, pelagic cormorants and western gulls. Brown pelicans are often seen roosting on the offshore rocks, though they do not breed in the area. 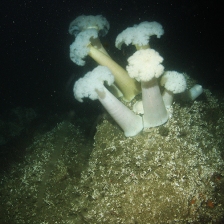 Ten Mile SMR “protects multiple habitats that are found on the Mendocino coastline,” says Mike Prall, a biologist and remotely operated vehicle specialist with the California Department of Fish and Wildlife. The SMR’s protection extends “from sandy beach to rocky coastline, rocks where birds nest and seals haul out, and submerged soft bottom areas of sand and mud as well as rocky reef. From shallow to deep water, Ten Mile SMR contains all the rocky headland-type of habitat unique to Mendocino County.”

In contrast, the coastline of Ten Mile Beach SMCA, which begins just north of the mouth of Ten Mile River, is almost entirely sand, extending south into the fragile dune habitat of Inglenook Fen-Ten Mile Dunes Natural Preserve. The sandy beach environment and intertidal zones of the SMCA are home to numerous species that live in and on the sand. Many of these organisms move up and down the beach with the tides, and most are hidden from view. 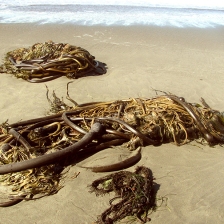 The kelp wrack washed on shore supports a myriad of small invertebrates, like beach hoppers (a type of amphipod), kelp flies, and sand crabs, which, in turn, are food for surf-zone fish, crabs, shorebirds, and terrestrial birds. In fact, forty percent of the invertebrate species living on sandy beaches depend on kelp wrack. The fish and crabs that feed off these small invertebrates become food for seabirds, seals, and sea lions, the next link in the food chain. This web of life can only be successfully sustained if all the parts are present, from the kelp wrack on the beach providing food for sand crabs and beach hoppers, to the redtail surfperch feasting on sand crabs and beach hoppers, to the seals devouring the redtail surfperch.

Scarcely a Trace is Left
Thousands of years before the Ten Mile MPAs were designated, the Coast Yuki, or Metkuyak Ontilka, resided in and cared for Ten Mile as part of their Tribal territory. They occupied permanent villages as well as inland and coastal encampments, and gathered traditional food sources including seaweed, kelp, invertebrates, fish, birds, marine mammals, and many coastal plants.

Today, Ten Mile is important to local Tribal peoples who remain culturally connected to the area. They continue to gather, hunt, fish, and harvest a variety of marine and estuarine species. These tribes are active and integral stewards of the coastal ecosystem, as were their ancestors for countless generations.

The first non-native peoples to visit the Mendocino Coast were Russian fur traders, who traveled up and down the coast periodically after 1803, but who did not settle in the area. The history of early settlement in the area is poorly documented, however with the forcible removal of indigenous peoples the number of white settlers grew rapidly. After 1860, the small enclave of Newport and the bustling lumber town of Kibesillah sprouted up along the coast north of Ten Mile River in support of the burgeoning timber industry. Newport was anchored by a series of timber chutes perched precariously on the high coastal bluffs. The chutes were used to load redwood logs onto waiting schooners, a labor-intensive and dangerous process for both the loader and the ship’s crew. Only small, maneuverable “doghole” schooners could get into exposed landings like Newport, and then only during calm sea conditions. Many of the schooners ran afoul of the rocks despite efforts to securely moor them, only to be repaired and sent out again.

The local lumber mill moved to Fort Bragg in 1916 and a railroad was constructed to carry redwood logs from Ten Mile River to Fort Bragg. Kibesillah and Newport were gradually abandoned; no trace of them exists today. The Ten Mile branch of the railroad line ran along the beach from the mouth of the Ten Mile River to the bluffs at MacKerricher. This stretch of railroad required constant attention to clear drifting sand from the tracks. The railroad line was converted to a haul road in 1949, which remained in use until 1983. Most of the remnants of the haul road were removed from Ten Mile Beach as part of a habitat restoration program. This environmentally sensitive area is now a protected cultural and historic site.

A Small Part of a Much Larger Network
The marine protected areas that safeguard the great diversity of ocean life at Ten Mile do not exist in isolation: they are part of a large network of MPAs that extend along the entire coast of California. Ten Mile SMR and Ten Mile Beach SMCA were designated in 2012 as part of that network.

From 2013 through 2015, researchers conducted a series of baseline studies on the north coast in MPAs and similar, non-MPA reference sites. Ten Mile SMR was included in all of those studies because it is relatively accessible, and harbors a wide variety of marine habitats and ecosystems.

“This site is one of the few places along the North Coast in which all the ecosystems were surveyed during baseline monitoring,” says Eve Robinson, North Coast Science Integration Fellow at the California Ocean Science Trust. “This rich dataset provides a unique opportunity to explore connections between beach, estuarine, rocky intertidal, kelp forest, and deep ecosystems. Ten Mile was also listed among the most negatively impactful sites by local fishermen, so understanding the dynamics at Ten Mile is important.”

Although it is too early to determine if the MPA Network is achieving the ambitious goals set out by California’s Marine Life Protection Act, there are promising trends, such as slightly higher abundances of fish (especially young rockfish) and invertebrates in Ten Mile SMR compared to a nearby non-MPA reference site. However, these baseline studies provide only a short-term snapshot of conditions. The California Department of Fish and Wildlife, along with its partners and collaborators, will continue long-term monitoring to evaluate ecological and socioeconomic changes associated with the Ten Mile MPAs. Over time, a clearer picture should emerge regarding how well they meet the goals set out for them in 2012.

While it is unlawful to injure, damage, take, or possess any living, geological, or cultural marine resource in Ten Mile SMR (or any state marine reserve), take of Dungeness crab is permitted in Ten Mile Beach SMCA. The allowed take of Dungeness crab in this area was determined by stakeholders including commercial crabbers, who identified this as an important crab fishing area relatively close to Noyo Harbor. In addition, 17 federally recognized North Coast Tribes are exempt from Ten Mile Beach SMCA take restrictions. Members of these tribes may fish and collect all species normally permitted under state and federal fishing regulations. Both MPAs allow for non-consumptive activities such as hiking along the beach, bird watching, whale watching, tidepooling, wading, swimming, surfing, kayaking, and boating.

Lots to Do at Ten Mile!

Inglenook Fen-Ten Mile Dunes Natural Preserve (part of MacKerricher State Park): This is a beautiful location for walking, bird watching, and wading. Park in the small lot just west of Highway 1 at mile marker 69.52. Interpretive panels describe the area. A wheelchair-accessible trail extends from the parking lot to the bridge, and offers a vista of the Ten Mile Estuary and beach. The walk to Ten Mile Beach SMCA can be quite challenging. An unofficial trail through heavy vegetation and soft sand is only intermittently maintained. The dunes and beach provide critical habitat for endangered plant species and the threatened snowy plover, a small shorebird that nests in the low dune plants and open sand above the high tide line. Once on the beach, visitors are advised to stay on the hard sand at the water line and not wander into the dunes. Dogs are not allowed in the preserve. 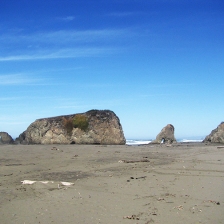 Seaside Beach: This beach is a popular spot for walking, swimming and tidepooling.  It is even feasible to carry a surfboard or kayak to the water. Park in the small parking area along the west side of Highway 1 at mile marker 70.64. The area on both sides the highway is managed by the Mendocino Land Trust. Interpretive panels near the pathway to the beach describe the area. This beach is dog friendly, but keep them leashed near the highway for their own safety. Even if a sand bar blocks the mouth of Ten Mile River, crossing the river is not recommended. Please do not cross if you have dogs: The Inglenook Fen-Ten Miles Dunes Natural Preserve is located on the south side of Ten Mile River, where dogs are not allowed (see above). 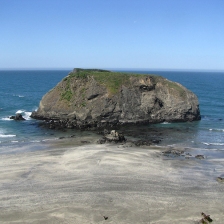 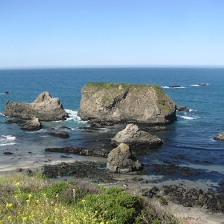 Overlook at mile marker 71.50: This is the best location to scan for colonies of seabirds. Park in the large pullout on the west side of the highway and look northwest to Newport Rocks, where there are breeding colonies of pelagic cormorants, western gulls, pigeon guillemots, and black oystercatchers. Brown pelicans can also be seen roosting on these rocks. 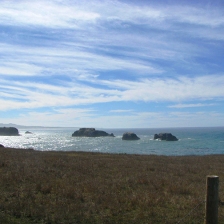 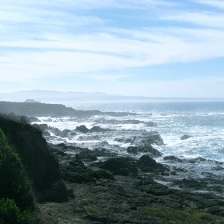 Vista Point: Park in the relatively large lot just west of Highway 1 at mile marker 74.09. Interpretive panels in the parking lot describe the area. It is a short walk down to the coastal bluff, with gorgeous views of the rocky coastline. The trail starts at the parking lot and descends rapidly to a viewing bench where you can sit and contemplate the ocean. From there, narrow dirt paths extend along the bluffs to the north and south. The northern boundary of Ten Mile SMR is just to the south of the viewing bench, starting at the first small cove. A short walk south on the narrow paths will bring you to rocky terraces where you are more likely to catch sight of seals hauled out on the rocks.