On a misty morning in early September, I took a trip to California’s Lost Coast with Calla Allison, director of the MPA Collaborative Network. Our mission: photograph Sea Lion Gulch State Marine Reserve (SMR), one of the most isolated marine protected areas (MPAs) in the state. As a marine reserve, Sea Lion Gulch enjoys the highest level of protection among the state’s handful of MPA designations, with no extraction and/or damage of living or non-living resources permitted.

While the terrestrial side of the Lost Coast is managed by the Bureau of Land Management and California State Parks, the California Department of Fish and Wildlife (CDFW) manages several MPAs along this remote stretch of coastline, among them Sea Lion Gulch. Getting there requires a three hour bone-rattling drive over crumbing asphalt and rutted dirt roads, then a half-day march along the Pacific, hard against the mountains that rise abruptly from shore. Along the way we passed remnants of 100-year-old homesteads and the famed Punta Gorda Lighthouse. In its heyday, the lighthouse was known for its remote location and austere beauty. Today all that remains is the shell of its former tower, looking out over wind-flecked waves and rocks blanketed with seals and sea lions. In the fall of 2015, a group of elephant seals took up residence next to the Punta Gorda Lighthouse. If you see them while hiking the Lost Coast trail, make sure to give them plenty of space – for their safety, and yours! 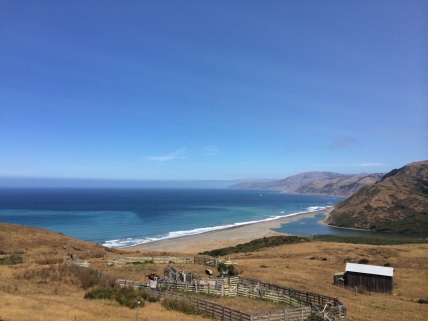 The hike to Sea Lion Gulch SMR begins at the mouth of the Mattole River, then heads south. CDFW photo by M. Robbins 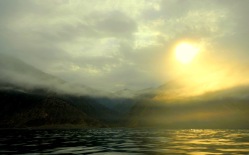 Sunrise over the Lost Coast. photo by I. Kelmartin, Humboldt State University

A new colony of elephant seals next to the Punta Gorda Lighthouse. photo by Paul Sever, BLM

Sea Lion Gulch SMR is located two miles south of the Punta Gorda Lighthouse. From the map it looks like a fairly straight-forward trek, however the going is treacherous. Hikers need to traverse rocky outcroppings and narrow strands where the surf beats at the foot of sheer cliffs; high tides may trap you, or worse yet, pull you out to sea. Consulting a tide table before heading out is highly recommended. Although Calla and I had reviewed our tide table thoroughly, we misjudged the rough hiking conditions. In the end, we were running full tilt, hopping boulders and dodging waves, determined to get some photos before the incoming tide cut off our return passage.

This marine reserve is spectacular above and below the water. Under the rolling surface, rocky outcroppings are covered with multi-colored nudibranchs, red gorgonian corals, and crinoid feather stars, while hidden crevices conceal wolf eels, red abalone and octopi. Swimming in the water column above, a dizzying kaleidoscope of rockfishes dart among kelp fronds extending towards the surface; blue, black, canary, vermilion, yelloweye, quillback and rosy, their names reflect an incredible biodiversity hidden from view.

In 2015, a team led by researchers at Humboldt State University, in collaboration with recreational fishermen and charter boat captains, conducted hook-and-line surveys inside and outside of four northern California MPAs – including Sea Lion Gulch SMR – to collect size and abundance information for rockfish. At each location, fish were caught, counted, measured, tagged and released. The study established baseline conditions against which future evaluations can be made, as part of the baseline monitoring program that collected ecological and socio-economic information related to MPAs along the entire California coast.

The results of the study show an ecosystem teeming with life.  According to Ian Kelmartin, graduate research assistant on the project, “We suspect that since Sea Lion Gulch is very far from any port, and the weather is often poor, it has enjoyed a sort of de facto protected status prior to being set aside as an MPA.”

Although Sea Lion Gulch SMR is a beautiful place to explore above and below water, it is off-limits to fishing and other extractive activities. As one of California’s 124 MPAs, Sea Lion Gulch will remain a place of remarkable diversity and beauty for years to come. Additionally, if the protections work as intended, the resident sea life of Sea Lion Gulch SMR could help to populate adjacent waters, meaning healthier ecosystems for fish, humans, and elephant seals alike.

Sea Lion Gulch State Marine Reserve is one of the 124 MPAs in California’s statewide MPA Network. Please visit CDFW’s MPA website for more information, and sign up to receive updates about the MPA Management Program.