The SMCA encompasses a side branch of the Monterey Submarine Canyon, one of the deepest submarine canyons on the West Coast of the United States. Both Soquel and Monterey canyons funnel nutrient-rich waters into the greater Monterey Bay, and provide unique and biologically productive habitats for many animals.

Soquel Canyon is home to a range of deep sea habitats. Rocky canyon walls and the mud-and-sand floor 2,000 feet below the surface offer ideal habitat for rockfishes, invertebrates like sea stars, sea pens and urchins, and fragile deepwater corals and sponges. Burrowing animals like prawns and octopus live in crevices, while Pacific Hake, Cat Sharks, and Sleeper Sharks lurk in the darkness.

Red-hued fish and other organisms in Soquel Canyon. CDFW/MARE photo 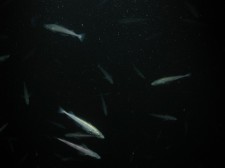 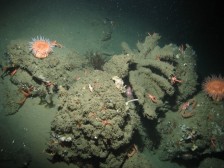 Soquel Canyon SMCA was established in September, 2007 as part of California’s network of marine protected areas (MPAs). Within the boundaries of Soquel Canyon SMCA, it is unlawful to injure, damage, take, or possess any living, geological, or cultural resource for recreational and/or commercial purposes, except for the commercial and recreational take of pelagic finfish. 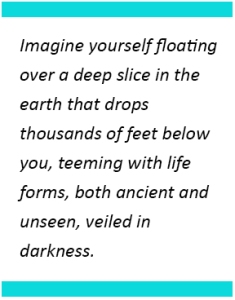 Seawater in the deepest parts of Soquel Canyon dates back over 1,000 years. These ancient waters are very cold (just above freezing), due to their lack of contact with sunlight. A shower of organic materials falling from the surface breaks down over time, causing an accumulation of nutrients and salt in deep waters. These factors make deep water denser than surface waters, which are warmed by the sun and diluted by land-based rivers and streams.

Microscopic plants called phytoplankton live where cold, deep ocean waters meet warmer surface waters. Phytoplankton use deep-water nutrients as well as sunlight to create food during photosynthesis. Tiny animals called zooplankton graze on phytoplankton, and are in turn eaten by small fish and crustaceans such as anchovies, sardines and krill. While these krill and fish take advantage of an abundant food source, they attract hungry humpback, blue, and gray whales into the bay, where they are often seen from shore.

Remotely operated vehicles (ROVs) allow scientists to explore the deep sea, which is the largest and least understood habitat on earth. Researchers with the California Department of Fish and Wildlife (CDFW), Monterey Bay Aquarium Research Institute (MBARI), and Marine Applied Research and Exploration (MARE) lead missions into the depths of Soquel Canyon and surrounding areas.

MBARI benthic ecologist Jim Barry compares the experience of ROV exploration to a helicopter ride in the middle of the night, and being dropped onto a hillside with a flashlight. “It’s an experience … you’re watching what’s coming out of the dark ahead as [the ROV is] moving along. You can’t see off into the distance, you can only see what’s 10, 20, 30 feet ahead of you as it comes into view.”

Changing Chemistry in the Deep Sea

In surface waters along our coast, temperature, oxygen, and pH levels often vary day by day and sometimes hour by hour. The fluctuation of oceanographic conditions in the deep sea, however, is generally much smaller. Because many animals in the deep sea have not needed to tolerate large fluctuations in ocean chemistry or temperature, they may have lost much of their ability to adapt when those changes occur.

The chemistry of the ocean is changing due to a number of factors including humans’ burning of fossil fuels, which injects high levels of carbon dioxide into the atmosphere.  Upwards of 70 percent of that carbon dioxide is absorbed by the world’s oceans, making them more acidic over time. As the world’s oceans undergo dramatic changes in chemistry, it is vital to look at the implications for marine species and habitats off our coast, including deep-sea ecosystems like those in Soquel Canyon. Scientists are just now unraveling what those implications may be.

Marine protected areas are powerful tools for ocean conservation. By reducing human impacts to the fragile deep-sea ecosystem and other important habitat types along the coast, California’s MPAs may create resilient marine environments better able to withstand the impacts of human-induced ocean acidification, warming, pollution, and other events. Reducing carbon emissions, and following the regulations while in MPAs, are two important steps people can take to help CDFW foster resilient ecosystems along our coast.

Soquel Canyon State Marine Conservation Area is one of the 124 MPAs in California’s statewide MPA Network. Please visit CDFW’s MPA website for more information, and sign up to receive updates about the MPA Management Program.